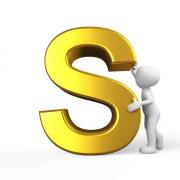 sef (adv.): used for emphasis after a statement or rhetorical question, often expressing irritation or impatience.

Segway (n.): a proprietary name for a two-wheeled motorised personal vehicle consisting of a platform for the feet mounted above a transverse axle with a wheel.

send-forth (n.): a celebration or event to make a person's departure; a send-off. Frequently as a modifier, as send-forth ceremony, send-forth party etc.

shaliach (n.): an emissary or agent; a representative or proxy. also (in Jewish worship): a person responsible for leading the communcal worship or a synagogue.

shticky (adj.): employing or characterized by shticks or gimmicks, especially to an excessive degree; gimmicky, contrived.

side hug (n.): a moce in wrestling in which an opponent is grasped from the side. Obsolete.

silent auction (n.): an auction, often for charity, at which bids are made in writing and then sealed with the highest bid winning

silent butler (n.): a container, usually made from metal, with a handle and a hinged cover, used for collecting table crumbs or the contents of an ashtray.

silent disco (n.): an event or party, usually held in a club or similar venue, at which attendees use headphones to listen and dance to music.

silent number (n.): a telephone number that is not listed in a directory at the request of the subscriber.

snackable (adj.): (of food) suitable to be eaten as a snack. (Of online content) designed to be read, viewed, or otherwise engaged with briefly and easily.

Sober-curious (adj.): experimenting with a period of not drinking alcohol.

speculoos (n.): thin, crunchy, spiced biscuits of a type popular in the Netherlands, Belgium, France, Germany and Austria. Also: one of these biscuits.

Shabbat goyah (n.): in Jewish usage: a non-Jewish woman who performs for strictly Orthodox Jews tasks forbidden to them on the Sabbath, such as lighting etc.