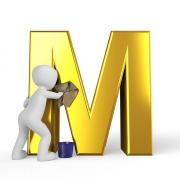 macaron (n.): a confection consisting of two small, round (usually colourful) biscuits with a meringue-like consistency, made with egg white and sugar.

MacGyver (v.): Make or repair (an object) in an improvised or inventive way, making use of whatever items are at hand.

makerspace (n.): a communal public workshop in which makers can work on small personal projects. A makerspace is like an art studio for the whole community. Most makerspaces cater to hobbyists rather than professional artists.

mama put (n.): a street vendor, typically a woman, selling cooked food at low prices from a handcart or stall. Also: a street stall or roadside restaurant run by such person.

manspreading (n.): The practice whereby a man, especially one travelling on public transport, adopts a sitting position with his legs wide apart, in such a way as to encroach on an adjacent seat or seats.

mentionitis (n.): originally: a tendency to mention something for the sake of comprehensiveness or exhaustiveness, rather than relevance (now rare). In later use... (see Oxford Dictionary).

Mx (n.): A title used before a person's surname or full name by those who wish to avoid specifying their gender or by those who prefer not to identify themselves as male or female. Pronounce "mix" or "mux"