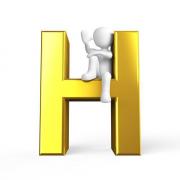 hangry (adj.): bad-tempered or irritable as a result of hunger.

hanukkiah (n.): a candelabrum holding eight lights and a shamash, used during the eight days of Hanukkah.

hard pass (n.): a firm refusal or rejection of something (such as an offer), as in "I think I'm going to give this a hard pass".

hellacious (adj.): an awful experience, often used to describe traffic, weather or even a period of time.

hen (n.): to drink the hen: to attend a celebration or drinking party in honour of a newly married couple, typically held at the expense of the bridegroom.

hench (adj.): of a person: having a powerful, muscular physique; fit, strong.

hen-day (n.): a day regarded as a unit of measurement in estimating the egg productivity of hens.

hen-feather (n.): a feather from a hen, used esp. for stuffing bedding, to ornament clothing, or as a lure in fly fishing.

Hennigian (adj.): designating the phylogenetic or cladistic system of classification of organisms devised by Willi Hennig.

Henotikon (n.): usually with the. A decree issued by emperor Zeno in 482, with the aim of restoring religious unity.

henpecking (n.): with reference to a woman: the action of continually criticizing or nagging her husband or male partner, or ordering him about.

henpecking (adj.): of a woman: characterized by a tendencey to criticise or nag her husband or male partner continually, or order him about: domineering.

Henry (n.): as a modifier: designating any of various coins minted during the reign of a monarch named Henry, esp. one minted when Henry IV was King of England.

Henry VIII (n.): as a modifier: designating or relating to a type of parliamentary provision which allows a government to repeal or amend and Act of Parliament.

hen-skin (adj. and n.): of an item of clothing or footwear: made of thin or flimsy material.

hygge (adj.): a cozy quality that makes a person feel content and comfortable.