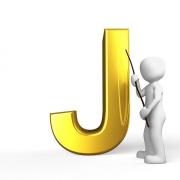 Japhetan (adj. and n.): of, relating to, or belonging to any of the peoples mentioned in Genesis 10:2-5 as descended from Japheth, one of the sons of Noah = Japhetian (adj.).

jedi (n.): a person who shows extraordinary skill or expertise in a specified field or endeavor.

Jewdar (n.): an ability, attributed esp. to Jewish people and likened humourously to radar, to identify a (fellow) Jewish person by intuition or by interpreting.

jewel case (n.): a box or case in which jewellery is stored, protected, or presented.

Jewfro (n.): a curly, frizzy, or bushy hairstyle worn by some Jewish people, reminiscent of an Afro.

Jewish American (n. and adj.): an American of Jewish origin or descent.

Jewish Christianity (n.): The state or fact of being Jewish-Christian.

Jew town (n.): a name for an area inhabited predominantly by Jewish people. In later use, esp. such area within a larger urban environment.