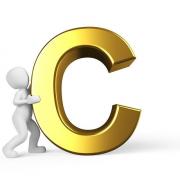 cab (n. 5): a robust box-like casing containing one or more loudspeakers used in the amplification of an electric instrument (esp. an electric guitar).

cab (n. 6): any or various wines made from Cabernet grapes; esp. Cabernet Sauvignon.

cab-over-engine (adj. and n.): chiefly North American and Australian. Of a lorry, truck, etc.: designed so that most or all of the engine is located below raher than in front.

camped-up (adj.): that has been made (more) camp; esp. (of a work of art, entertainment, a gramatic performance, etc.) performed or executed in a playfully exaggerated manner.

cancel culture (n.): the practice or tendency of engaging in mass canceling as a way of expressing disapproval and exerting social pressure.

carbon sink (n.): a forest, ocean or another natural environment's ability to absorb carbon dioxide from the atmosphere.

Chicagoese (adj. and n.): of, relating to, or characteristic of the city of Chicago, its inhabitants, or the speech or language used there.

Chicagoland (n.): Chigaco and the surrounding regions of north eastern Illinois, plus (typically) adjoining parts of Indiana and Wisconsin, considered as a unit.

Chichimec (n. and adj.): a member of any of various indigenous peoples of Mexico, esp. the nomadic and semi-nomadic peoples inhabiting northern and central Mexico before the...

Chichimeca (n. and adj.):  a member of any of various indigenous peoples of Mexico, esp. the nomadic and semi-nomadic peoples inhabiting northern and central Mexico before the...

chickee (n.): in the south-eastern United States, especially Florida: a type of open-sided dwelling consisting of palmetto thatching on a log frame with a raised...

chicken factory (n.): a building where chickens are hatched in temperature-controlled conditions in large numbers; (in later use) spec. one where the chickens are confined.

chicken finger (n.): usually in plural. A narrow strip of chichen meat, esp. from the breast, coated in breadcrumbs or batter and deep-fried, and typically served with a...

chickenhead (n. and adj.): colloquial (chiefly U.S.). Usually as two words or with a hyphen. A foolish of stupid person. Cf "chicken-headed (adj.)".

Chicken Licken (n.): a person who panics easily, or spreads alarm amongst others. Also as a modifier. Cf. "Chicken Little (n.)".

chicken noodle soup (n.): a soup made with chicken and noodles, sometimes popularly regarded as a remedy for all ailments or valued for its restorative properties.

chicken scratch (n. and adj.): in plural or as a mass noun: unintelligible, illegible, or roughly-drawn marks, lines, symbols, or letters, typically made by hand; illegible.

chicken soup (n.): a soup made with chicken; esp. a simple clear broth popularly considered as a remedy for all ailments or valued for its restorative properties.

chichen tender (n.): a cut of meat consisting of the tender muscle closest to the spine on the underside of a chicken breast.

chickeny (adj.): resembling, reminiscent of, or characteristic of chicken meat or a chicken; consisting of, or flavoured with chicken.

chickie (n.): used as a term of endearment, esp. for a child or woman.

chop-chop (n. 2): bribery and corruption in public life; misappropriation or embezzlement of funds. Also as a modifier.

Chrain (n.): horseradish, spec. a piquant sauce made with grated horseradish, vinegar and (sometimes) beetroot, used a condiment and traditionally served with...

climate emergency (n.): defined as a situation in which urgent action is required to reduce or halt climate change and avoid potentially irreversible environmental damage resulting from it.

code-share (n.): a commercial arrangement between airlines allowing one to sell seats on a flight operated by the other, with each airline using its own alphanumeric... (Cf. Oxford Dictionary).

code-switch (n.): an act or the action of shifting between languages, or between dialects or registers of a language, within a discourse, esp. in response to a change... (Cf. Oxford Dictionary).

cod-war (n.): any of a period of disputes between the United  Kingdom and Iceland from 1958 to 1976 over the fishing rights of the coastal waters in the North.

cook-chilled (adj.): of food or a meal: cooked, then immediately chilled, to be served reheated within a period of days; prepared using the cook-chill system.

Cookie Monster (n.): a person who or a thing which resembles the Cookie Monster in being voraciously hungry or insatiably greedy; someone or something that devours things.

couscoussier (n.): a steamer used to cook couscous, consisting of two interlocking pots, the upper one holding the couscous and having a lid and perforated bottom.

coworking (n.): working in a building where multiple tenants (such as entrepreneurs, start-ups, or nonprofits) rent working space and have the use of communal facilities

crowdfunding (n.): the practice of obtaining needed funding (as for a new business) by soliciting contributions from a large number of people especially from the online community.

cucamelon (n.): a climbing plant of the gourd family, Melothria scabra, native to Central American and grown elsewhere for its fruit, which resembles a grape-sized...

currywurst (n.): a dish consisting of German sausage covered with a sauce of tomato ketchup mixed with curry powder.